Damoy, a small wooden hut on a rocky outcrop in Antarctica will take centre stage in our conservation efforts this coming season.

The hut in Dorian Bay, along with the glacial ‘skiway’ on Damoy Point, formed the ‘Damoy Point Air Transit Facility’, operated by BAS from 1975-1993. It provided shelter for operators and scientists travelling to and from Rothera (Station R) and other BAS sites, especially when ice prevented access by sea.

Proposed for demolition in 2007, the hut was saved and designated as Historic Site and Monument No. 84 under the Antarctic Treaty System in 2009. It has been in our care since October 2009.

This special hut is the only protected historic ski and airway, providing shelter and safe passage for early climate scientists en-route to making vital discoveries on the warming of our planet. Damoy has for many years been home to human stories and artefacts that give a glimpse into the fascinating often hidden history of how science was supported by logistics in Antarctica. 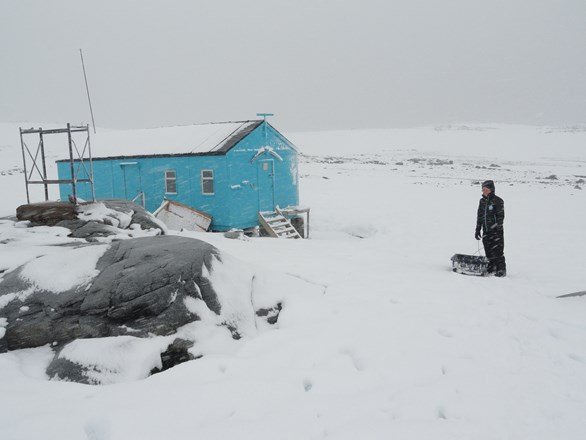 What are our plans for Damoy?

Placing the future protection of the site and its role in Antarctic history at the heart of our work, we plan to restore the hut to its original bright orange (S1050-Y50R) during the 2022-23 season. This will involve stripping back the existing teal paint scheme, repainting in primer and paint specially formulated to withstand the low temperatures.

We believe that the original orange on the exterior of the hut was probably selected for its visibility, so that the pilots landing on the adjacent skiway at Damoy Point could easily identify the building. While no written record has been found to confirm this, it is consistent with other attempts to make buildings visible against snow from the air.

The restoration of the hut to its original colour scheme will improve the legibility of the hut’s historic function as an air transit facility, and provide a key hook for the improved interpretation of the site as a whole.

As with all our conservation work in Antarctica, protecting both the historic site and its environment is always a priority. With this in mind, our team will be careful to collect paint scrapings using a specially devised methodology to prevent contamination of the environment.

We have a great team heading South to manage this exciting conservation project: a small field team of one field guide and two conservation professionals experienced in decorating historic buildings. Alongside this main project, the team will also be carrying out minor repairs and cataloguing tasks - perfect for those days when the weather does not allow for painting and during drying times.

Following the break in our operations due to Covid-19, this is the earliest opportunity we have had to restore the hut to its original colour. The decision to embark on this important conservation project follows a period of analysis and research that began with paint sampling undertaken by the conservation team in 2018, and was subsequently sent to a specialist paint conservator for analysis.

In 2019, a historic paint report was produced by Phillipa McDonnell of Lincoln Conservation that found that there were four main decorative phases between 1975 and 2018, with the earliest phase, between 1975 and 1989, of bright orange. This paint report corroborated photographic and written evidence from BAS archives, and anecdotal evidence.

With our research and analysis answering essential questions to inform the planning of the project, the upcoming season is the right moment for us to revert Damoy to its former, orange, glory.

Do you have a memory of Damoy?

We are currently collecting stories, photos and memories about the site. We’d especially love to hear from you if you travelled through Damoy, if you were a member of a former maintenance party, or if you were involved in painting the hut orange in the past. Please contact us at info@ukaht.org to share your memories.

Adopt a Penguin this Christmas

For the perfect gift that lasts all year.